Zizek Press :: Pimpin' Books Is Hard, But We Must Try

If you're not familiar with their work, please do consider checking them out. If you're a fan of my writing, I'm sure you'll find something to love among the Zizek Press stable. And that's not just hollow praise; I'm not a joiner by nature, so the fact that I signed on is a testament to how much I respect these authors, who truly are among my own personal favorites to read.

And if you have read some of these works, please do consider leaving a positive review on Amazon, Goodreads, etc. It's hard for emerging independent authors to get attention, and customer reviews really are one of our best tools for leveling the playing field.

Here's a rundown of our current line-up.

One man goes to Tokyo to end the world. It goes fairly well.

As a Japanese cult gets ready to stage a massive attack, they are forced to recruit a secretive young bio-chemist from the West. They hide out on the fringes of Tokyo, taking care of the daily business of preparing for the apocalypse, until the foreigner’s secret past starts to come to light and threaten their future dreams.

As usual Xolo got the mail and went to a man-made planet to kill someone.

Unfortunately there were these kids and he got sentimental and soon he had a bomb in his head that was falling in love with him and he had to go back down the old genocide hole to Earth and find out who was the king there and why he was irritating important people with space yachts. 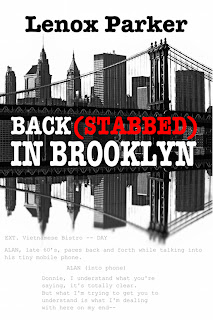 Back(stabbed) in Brooklyn
Available at: Amazon US | Amazon UK

Hollywood legend Howard Kessler is washed up after a series of sordid, drunken mistakes, and returns to his Brooklyn roots after decades of success. What he finds is not the nostalgia he expected, but a group of hardened guys with grudges to match. The gang all finally meet up at a dive in Chinatown, but instead of a warm reunion the deep resentments of the past turn into exploitation and deceit.


Lucia Adam
Vein Fire (Coming Soon)
When thirteen year old Matt took a cinder block to his playmate Hannah’s legs, he never knew things would end like they did. Years later, after he is released from a secure psychiatric facility, he is sadistically drawn to Hannah again but finds himself trying to protect her from the other disturbed individuals that gather around her.
Vein Fire gives a startling portrait of a young woman with Borderline Personality Disorder. Hong Kong, present day: A man teaches children, has sex with a seventeen year old girl, and thinks himself into a dark, dark hole.

Only the recent suicide of a Korean model can pull him out.

“It’s David Lynch in a hotel room with the brain of Camus guarded by Kubrick and analysed via satellite TV by Pedro Almodovar.” – Robert Patrick, ‘T-1000′ from ‘Terminator 2: Judgment Day.’

Hollywood on the edge of forever
Available at: Amazon US | Amazon UK

Why is Tom Cruise wandering around the deserted basement of a movie studio? What is Christian Slater doing in the sewers with a fake shotgun? Why is Nick Nolte killing Russians? What is this movie called ‘Statham’s Brain’?

And the big one…Did Jack Nicholson really survive ‘The Shining’?

‘Hollywood on the edge of forever’. An uncountable number of satirical stories, whipping a vaguely familiar Hollywood to within an inch of its life.’ In addition to the books, Zizek Press also runs a blog at zizekpress.com featuring quality absurdist satire about celebrities and pop culture, contributed by the five of us plus the elusive Zasulich. Recent posts have included an interview with the cast of The Hangover 2 in which Zach Galifianakis eats a couch, Lars Von Trier texting Kirsten Dunst at the Cannes Film Festival, Ryan Reynolds' poetic ode to the Green Lantern, and a behind the scenes peek into the green-screened mind of George Lucas.

We're also on Twitter as @zizekpress and have a Tumblr at zizekpress.tumblr.com.