In my last post about the Safe Holiday Guide and my own half-baked Operation Indie Christmas notion (and apologies for my un-PC use of the term Christmas, please feel free to substitute whatever phrase best suits your particular set of superstitions), I talked about giving indie books away as presents. 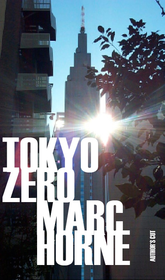 If you're interested in doing this yourself and are open to suggests, I'd like to recommend Marc Horne's novel Tokyo Zero, which is listed on the Safe Holiday Guide and partly why I was inspired to cook up this scheme in the first place (I have someone in mind who I think would love the book).

If you're interested in sampling the novel yourself, Marc just posted a new edition over at Feedbooks as his contribution to Free-E-Day with a spiffy new cover and an "author's commentary" appendix.  And if you want to gift it, you can buy a paper copy at Amazon and enjoy all the benefits of making commerce with a corporate powerhouse, like "supersaver shipping" and "oneclick buying" and all that good stuff.

Here's a review, 'cause that's how I roll.  And fair warning - this is one of those irritating, pretentious reviews that starts of talking about something else completely unrelated to the matter at hand, but bear with me.

Back when I was living in Los Angeles, I used to go to this really cool little comic shop in Culver City called Comics Ink.  There was a clerk who worked there - Adam, I think, but memory fails, as that was a lot of drugs and scotch ago - who I heard, on more than one occasion, berate customers by saying: "If you're not reading Powers, then why the hell did you even learn to read?"  Now I didn't necessarily share his enthusiasm for that title specifically, but I always loved the notion that a book might be so good that not reading it is in some way squandering your literacy. 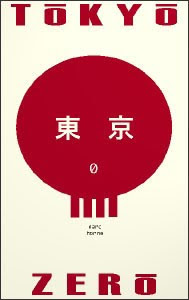 Tokyo Zero is so good that, if you haven't read it, you may in fact be squandering your literacy.

Ostensibly a thriller, it starts off feeling more like a travelogue about a westerner's first observations about Tokyo, then starts cooking with a nice, tight little plot about the planning of a terrorist attack - inspired by Aum Shinrikyo sarin gas attacks in '95.  But the overall structure of the book is like a whirlpool, and soon everything speeds up, frantically and furiously, with crazy shit being tossed at your head around every corner - great big chunks of sci-fi, eastern mysticism, posthumanism, and conspiracy theory.

Seriously, this is the kind of novel that takes you by surprise,  sneaks up on you in a dark alley.  You're plodding along pleasantly, enjoying some adroit observations on Tokyo that deftly straddle the middle ground between hollow reverentialism  and ugly-American criticism, and then BAM - you suddenly realize you're alone in a subway car with a footless cult leader who's telling you the real story behind Judas's betrayal of Jesus.

Because make no mistake about it - this is a novel in every sense of the word.  Characters evolve and develop over time, the plot is advanced gradually in hints and teases, and the book that you finish is not the same book you thought it was when you started reading.  It's the type of story that you have to set aside your 21st Century Web 2.0 micro- nano- attention span for and let the work take its time revealing its many faces to you.

Marc once described it, tongue-in-cheek, as "Lost in Translation meets Fight Club"; the whole time I was reading it, I kept thinking about The Invisibles.  If there's someone on your gift list who likes any of those, you won't go wrong with Tokyo Zero.

And yeah, The Invisibles makes two comic book references in one post - deal with it.

Both old-skool and new-skool covers for Tokyo Zero are copyright Marc Horne and used under Creative Commons license.
Labels: Reviews